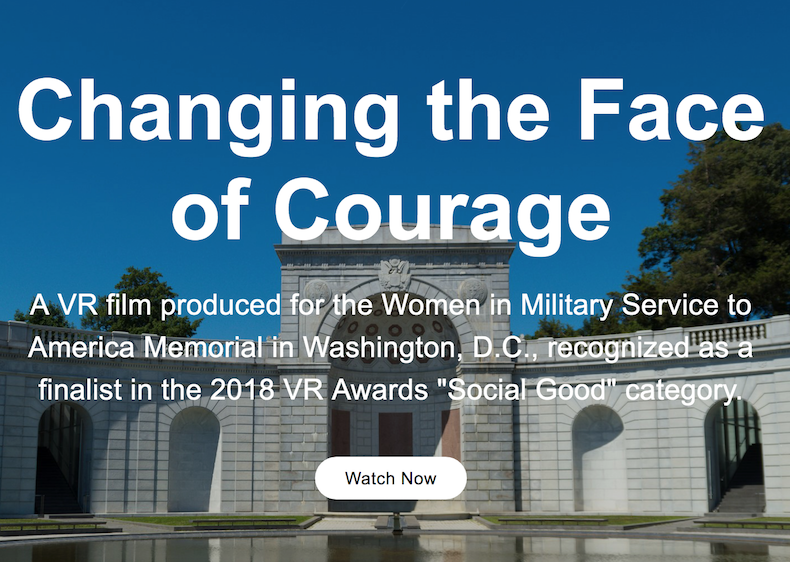 Sarah Redohl is an immersive media journalist who creates social impact VR documentaries such as Changing the Face of Courage, Welcome Home: A Veteran’s Story and Zambia, the Gift of Mobility.

The Immersive Shooter — a resource website containing interviews with experts in the VR industry, and offering tips and nuggets of wisdom that Sarah and her co-founder Robert Hernandez wish they’d known when they were first starting out in VR.

Sarah was born in the US but is now living and operating out of Bohn, Germany.

Sarah’s funding model includes direct sponsorship through organizations, and grants from corporations invested in VR content creation. As a journalist, Sarah directly sells her work to newspapers and online journals for publication.

Changing the Face of Courage is an immersive 360 film which honours the history of women in the American military service.

Zambia, the Gift of Mobility is an immersive documentary about the PET (Personal Energy Transportation) all terrain wheelchairs that have changed the lives of many Zambian women who live with physical disability.

Welcome Home: A Veteran’s Story is a 360 film focussing on the issue of veteran homelessness and the Missouri non-profit who is tackling the problem.

The Immersive Shooter: Sarah co-founded this free educational online resource for creating immersive VR work with Robert Hernandez who teaches VR journalism at University of Southern California. This website is full of the resources they wish that they had had when setting out on the journey of immersive, VR shooting, as both are passionate about helping to develop this industry.

The Immersive Shooter is important to Sarah as a resource for other creators. She is passionate about the development of VR journalism and feels the best way for that to happen is to have a lot of great content creators. The best way to do that is to make it easier for newcomers to VR to have access to the resources they wish they’d had, and to benefit from the collective wisdom of VR practitioners.

Sarah is the immersive new media journalist behind Changing the Face of Courage and other immersive 360 film projects such as “Welcome Home, A Veteran’s Story” and “Zambia — the Gift of Mobility”.

You can find many of Sarah’s 360 stories on her website sarahredohl.com

The Road to Sustainable Funding

Zambia, the Gift of Mobility was Sarah’s first project. This project was self-funded and freely released to allow the creators to build an international audience.

Changing the Face of Courage project was commissioned directly by the Women’s Memorial for their anniversary. As the Women’s Memorial wanted the project to be in-house, they did not want the story to be picked up and published by a big name publisher. In the past, Sarah has found in working with non-profits that being picked up by a major publishing company is one of the main goals.

Welcome Home: A Veterans Story is a project about the issue of veteran homelessness in the US. The funding model behind this project was a mix of self-funding along with a stipend from the McClatchy publishing company to include the story in their Facebook series, The War Within.

Sarah notes the funding opportunities provided by companies with a vested interest in content creation: Grant programs and opportunities like these include Youtube VR Creator lab, Google’s Jump Program, Ocular Stories Studios, and Oculus for Good.

And there’s Journalism 360 — a partnership by Google News Initiative, McKnight Foundation, and Online Journalism Association — which Sarah says has given out half a million in funding for VR projects.

Samsung funded the New York Times Daily 360 for some time — with a 360 video produced every day. Samsung pulled back from this program and doesn’t currently offer funding opportunities for immersive projects.

Sarah notes that this can’t be the way projects are funded as creators never know when companies are going to pull back.

This can’t be the only way to fund what you do.

Through The Immersive Shooter, Sarah has had the opportunity to interview many different VR creators and she offers some of the funding strategies these creators have used.

For creators who wish to release their work for profit, there are paid apps that can house their VR work. However, even these are not dependable. Sarah has heard that Steam VR has announced that they won’t be supporting 360 videos in the near future, but are considering 180 VR instead.

Some creators have tried producing 360 Stock to subsidize their other work. Sarah has heard mixed reports on success from this kind of venture.

Liquid Cinema is an authoring tool and CMS for immersive content creators which allows creators to provide clients with a fully customized app experience for for-profit release of content.

The Immersive Shooter is funded by a mix of advertising revenue, along with Sarah and her co-founder Robert Hernandez’s free offerings of  insights they have gained while on their own journeys of VR shooting. Funding this site was a lot easier when they started it in 2017. Sarah thinks this is because the industry has seen a pull back from VR that people in the industry are calling, “VR winter”.

Sarah is also co-founder and co-writer of the Immersive Shooter, an educational website for learning how to create immersive films. Adding new interviews depends upon the amount of advertising support they have from time to time. She continues to add tips from her own learning journey regardless of funding as this is her passion that she is driven to share.

Into the Future: Model for going forward

Self-funding projects has been hit or miss in terms of selling and placing these stories. Sarah now plans

to make sure to have those funding partners and publishing partners nailed down in as early part of the process as possible so they have buy in.

“I’d love to see more ideas coming from content creators that don’t have to be self-funded.”

Shifting Mindset — One of Sarah’s key tips was to take advantage of the freelance community culture, making bigger projects more sustainable and feasible through freelance relationships. This project to project approach is similar to the movie industry and is more sustainable than forming studios. The benefit of these kinds of collaborative groupings is the sense of community that has formed amongst immersive content creators. Sarah remarked that the industry is formed of a small, positive community of creators who know each other, who are excited to share best practices with each other, whose relationships are built more upon collaborating than competition and that