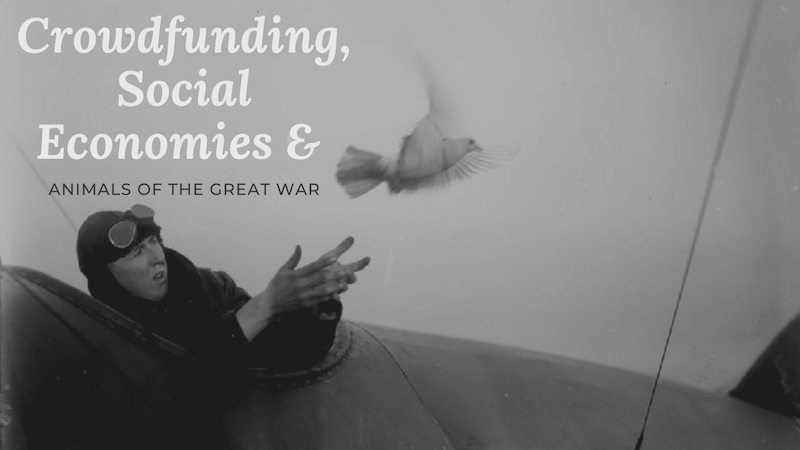 In March of 2019 we were fortunate enough to interview Maria Grazia Suriano, the researcher and writer of the eBook ‘Animals in the Great War’ for our Sustainable Funding Series for Media, Educators, Technologists, and Creators. Animals in the Great War is an open educational eBook designed to investigate the World War I and study its history from the standpoint of the animals that took part in it. In addition to the eBook, due to both necessity in crowdfunding this project and in observing what students responded, a number of digital photo and video storytelling pieces have been developed to compliment the eBook and engage students in this history in a manner that mirrors their storytelling preferences and that they respond with interest to. The target audience for the Animals in the Great War eBook are educators, history teachers, and students of history (high school aged and older). Below, we share that interview with insights into the Sustainable Funding Model that Maria and her team at Associazione Culturale Se utilized in funding the Animals in the Great War eBook, what Maria learned about crowdfunding, and how she will apply what she’s learned to future projects. Maria and I also discuss digital storytelling, teaching empathy, othering, breaking down borders, open education, and the Animals in the Great War eBook itself. Some of what we discuss here, Maria and her team at Associazione Culturale Se have gone on to apply to other projects, including her eBook ‘Percorrere la nonviolenza‘.

Link to the Project: https://www.researchgate.net/publication/323612634_Animals_in_the_Great_War

The Project : Animals in the Great War eBook

Animals in the Great War is a free eBook designed to explore the history of the Great War (World War I) through the stories of the animals from many different countries that partook in World War I – challenging the concept of borders, exploring othering, and instilling empathy.

This project, aimed at secondary school students and teachers, is designed to get young adults interested in learning about the history of the Great War (World War I) through the stories of animals. Stories like those of the pigeons in espionage, that cannot help but intrigue.

By learning about the war through the stories and perspectives of animals, it is hoped that it will encourage students to think critically about history, the construct of borders and othering, as well as instil empathy.

In the research, crowdfunding, and speaking on this project, it was recognized that it was not only the stories of animals in the war that were engaging students in this history education project, but the photo and video storytelling pieces shared in talks on and in the crowdfunding campaign. As such, stories within the eBook have been modified into smaller, more easily accessible storytelling pieces and shared via the Associazione Culturale Se’s blog:

Case Studies from Animals in the Great War

The Creators : Storytellers behind the Animals in the Great War eBook

Maria Grazia Suriano is an independent historian, specialized on European history with a focus on identities, cultures, borders and ways to cross them.

In 2016 Maria cofounded Associazione Culturale Se, a non-profit organization with the aim of spreading inclusive knowledge and enhancing the subordinate subjectivities often excluded from institutional narratives. The Associazione Culturale Se’s focus with this is on promoting history education from the twentieth century, revolving around themes of desire,  empathy,  possibilities, responsibility, affectivity, differences, diversity, and solidarity. In doing this they offer courses and workshops in history education, and create educational history resources for use in the classroom, like the eBook Animals in the Great War and the accompanying Case Studies on their website. The organization’s funding plan is based on public financing, but as this is scarce the organization offsets its financing by offering editorial services, and Maria offsets her income as a copyeditor, yoga teacher, and translator.

As mentioned above, the Associazione Culturale Se in the past has looked to public funding to finance their projects. In the case of the Animals in the Great War eBook, however, they embarked on a new funding journey by entering their eBook into a funding competition with the Europeana Foundation. The competition, Strike a Match for Education was a Matching Fund, designed to encourage co-investment between public and private institutions and the crowd. In this case, for each 1 EUR donated by the crowd, Europeana contributed 1 EUR up to a maximum of 100 EUR per donation and no more than 3,500 EUR per project, once the campaign achieved its minimum crowdfunding goals. To apply, the project had to be digital, use Europeana openly licensed content as a central element and be relevant to a secondary education audience (students 11-18 years and teachers).  Europeana was also looking for scalable and present ideas that would work across multiple countries and/or languages.

Three projects, including the Animals in the Great War eBook were approved for matching funds, and then entered into a crowdfunding campaign to raise the public portion of the funding on Goteo.

Some of the distinctive features of Goteo are:

For Maria and her team at the Associazione Culturale Se this was their first crowdfunding experience, and they realized they were wholly unprepared for it.

It’s naive to approach crowdfunding without a network and digital strategist / strategy. You need to be prepared. A good idea is important, but it’s not enough to be successful in this social economy.

With hard work and creativity, the Associazione Culturale Se were able to meet their minimum goal of 3,000 Euros with the matching funds from Europeana, which covered the cost of the eBook being translated into English from Italian. To help in reaching this goal, they utilized creative commons photographs from World War I and created video shorts with those images on the service of various animals in the war.

Maria and her team learned a lot about crowdfunding in the process, including:

The Associazione Culturale Se had hoped to gain the support of an animal organization in the campaign, but unfortunately were not able to garner this. Maria suspects this was because they were too small as they had not begun to build an audience before the start of the campaign.

While not as successful with funding the Animals in the Great War as they would have liked, Maria and the Associazione Culturale Se did learn a lot, and found that the idea of becoming a part of a social economy really resonated with their sensibilities. This is something they wish to explore more on future projects and even crowdfund again. Just next time they will be better prepared by approaching crowdfunding with an international project, with an international partner, a plan in place, and someone with digital strategy, storytelling, and crowdfunding experience to take the lead on that aspect of the project. They also learned that a book is not enough, and want to delve into other mediums and forms of storytelling to engage the students in history.

As they further grow a social economy around their project, they’d love to see companies with similar values to theirs be a part of making their work sustainable through sponsorship.

Culture Has to be Free

One of the fundamental believes of Maria’s and the Associazione Culturale Se’s is that culture needs to be free to make information accessible. One of biggest problems that teachers face is that they don’t have the money to buy the resources that they need. This problem does not solely sit with educators though, but also with learners. Many people don’t have the possibility to continue with their formal education after public schooling, making it important that they have something to think on, something different than a school book.

It’s important. Culture has to be free … at all levels, because many people have no possibility to continue after school. It’s important that they have something to think on … something different than a school book.

Have a question for Maria? Ask it in the comments below, and we shall see if we can get you an answer.

A enormous thank you to BCIT for sponsoring this case study, to Grant for the Web for funding the broader Sustainable Funding Series, to the AMTEC Trust Award and CNIE for funding my professional development work around this work, and to David Porter for acting as an advisor to me in this work.

Find Us in the Fediverse