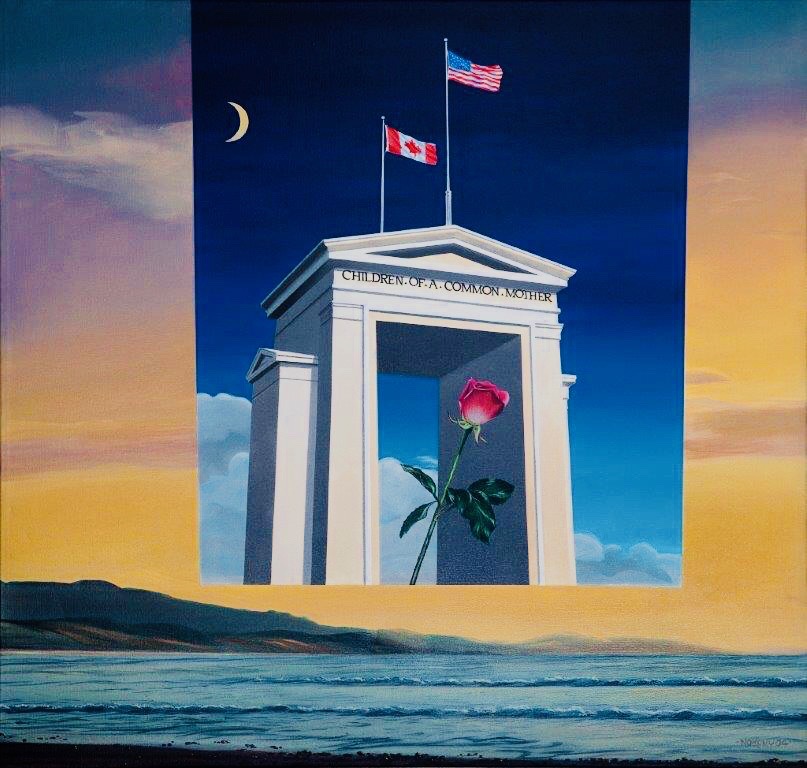 In tribute to the 46th American Inauguration of President Joe Biden and Vice President Kamala Harris, our friend and Canadian artist Denis Nokony invites anyone who wishes to celebrate the unity and friendship between Canada and the United States of America to utilize his artwork entitled ‘Peace Arch’ for free online, provided they credit him as the artist, are not making money from sharing the piece, and do not alter the image.

‘Peace Arch’ – About the Artwork

‘Peace Arch’ is a 38”x 40” acrylic painting on canvas that was first created in 2004, representing our shared border between British Columbia and Washington at Peace Arch Park in White Rock, BC and Blaine, Washington. It’s day has come to be shared on the inauguration of Joe Biden and Kamala Harris.

As written by Robert Enright of Denis Nokony’s 1981 exhibition at the Mendel Art Gallery entitled, ‘Figure in Landscape: Drawings’, “The drawings present a synthetic relationship between the figure and the landscape, between being and space, and between quotidian observation and dramatic realism. Mr. Nokony is involved in a process that is both a retrieval and a reinterpretation of prairie space through its human dimensions.”

Landscape and sky feature prominently in much of Denis’ artwork, perhaps as a result of his upbringing in the Canadian Prairies, having been born in Oxbow, Saskatchewan. He became interested in drawing and caricature at an early age. Having, however, only ever taken one drawing course from Canadian painter Reta Cowley, as a young university student at the University of Saskatchewan where he studied political science, he considers himself to be a self-taught artist.

Over the years, Denis has had a number of careers, in which art has played a prominent role from commercial artist and freelance illustrator to art teacher to arts development officer to Assistant Director for Cultural Services for the City of Burnaby today. Throughout all of this, Denis has continued to create and exhibit his art. While his medium of choice has predominantly been drawings and paintings, it has also include a National Film Board short animated film entitled ‘The Giant‘.

To touch base with Denis or inquire about his art, he can be reached at denis[at]storytogo.ca.